Kenneth Hamilton discusses his new Stevenson CD on Classical 95.9 WCRI radio in the US under the title “Conducting Conversations”.  This is available as a podcast on the following link:

The podcast include some interesting informal chat about the pieces themselves, and includes 7 complete tracks from the CD (the Three Scottish Ballads, Heroic Song for Hugh MacDiarmid, Rachmaninoff Lilacs, Novello/Stevenson “We’ll gather lilacs“, and Tauberiana).

This CD has just become available (July 2016).  Kenneth Hamilton has recorded it on a fine Hamburg Steinway at the School of Music, Cardiff University, in Wales. The playlist is as follows: 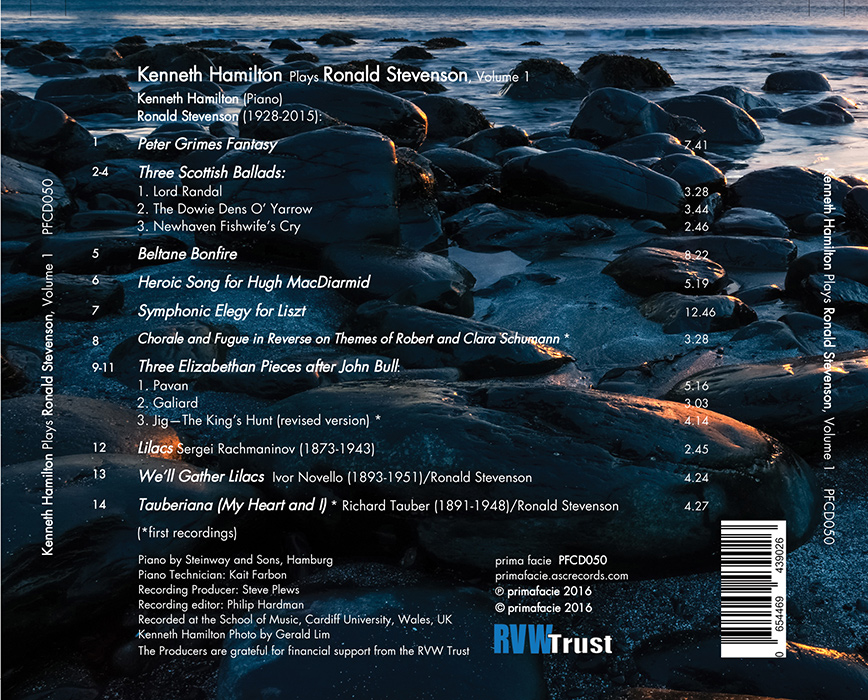 Kenneth is already working on the second volume: sponsorship will be very welcome and may be made using the pro forma letter below (click to open this pdf) 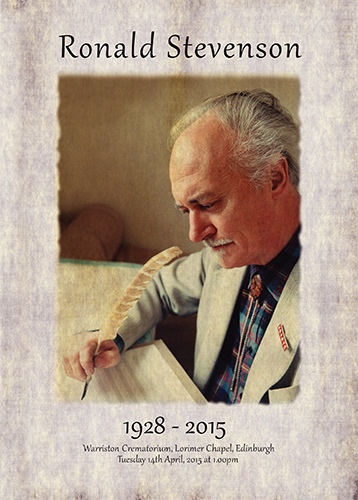 This moving tribute event was fortunately recorded by Mark Norris (and includes improved quality to the pre-recorded pieces). Download and listen to the funeral recording

You can also download a pdf of the Order of Service

Ronald Stevenson was a prolific and influential composer and performer. He was a musical visionary and conceived works on a grand and imposing scale – two in particular reflect his ability to envisage monumental compositions. His Passacaglia on DSCH for solo piano, written in the early 1960s (based on Dmitri Shostakovich’s initials) lasts 90 minutes and has been memorably recorded by John Ogdon. In 2008 the BBC Scottish Symphony Orchestra performed the world premiere of his choral symphony, Ben Dorain, based on an epic Gaelic poem. It had taken Stevenson more than 20 years to compose and was scored for two choirs and two orchestras. Stevenson could envisage music on a monumental scale and also in more intimate solo compositions; he brought to all his works a freshness and originality allied to a vision of life as a vast spectrum of human experience.

The Scottish composer John McLeod was a close friend of many years and told The Scotsman yesterday: “Ronald was a giant of a man and a giant of a composer. He might have been more widely recognised had he lived in the 19th century. His piano playing was outstanding – his technique was phenomenal. I conducted him when he played the Greig concerto with the Glasgow Symphony Orchestra and he was tremendous. His playing and teaching has had huge influence on many young Scottish pianists.

“It was always fun working with Ronald. Everyone came away knowing more about the music than when you started rehearsals.”

Ronald Stevenson’s father hailed from Kilmarnock and his mother was Welsh. That Celtic background was to remain a lifelong passion. After school in Blackburn, Stevenson studied at the Royal Northern College of Music where he majored in composition and the piano – graduating with special distinction in 1948. He then studied orchestration at the Conservatorio di Santa Cecilia in Rome and in 1950 moved to Scotland, settling in West Linton in 1955. He was a man with strong left-wing political beliefs and as a pacifist refused to do national service – spending the two years in jail.

Stevenson was a renowned musicologist and lecturer. He held senior lecturing posts at the University of Cape Town, the Shanghai Conservatory of Music, at the Juilliard School, New York and at Melbourne University.

Stevenson championed the music of the 19th-century Italian composer Ferruccio Busoni and in the 1970s presented a series of programmes on Radio 3 on his music, which did much to re-establish Busoni’s reputation. A BBC2 documentary followed. In 1981 Stevenson wrote an extended series for BBC Radio Scotland on the bagpipe, clarsach and fiddle music of Scotland.

The Edinburgh-born concert pianist, Susan Tomes, told The Scotsman how much, as a teenager, she appreciated Stevenson’s “inspirational lectures”. She said: “Using wide-ranging examples from music, poetry, philosophy and politics he drew our attention to many valuable and perhaps under-acknowledged ways of looking at music.