I was confused. When I knew that I was receiving a CD of Ronald Stevenson’s piano music to review, I mistakenly assumed that it was a second volume to Murray McLachlan’s outstanding triple-disc set on Divine Art (dda21372). I had already reviewed this CD back in 2013. As it turned out, the CD in question was the second instalment of Christopher Guild’s survey for Toccata Records. Preparing for this review, I was reminded that there is yet another exploration of Stevenson’s music underway. The first volume of Kenneth Hamilton’s study of the composer’s music appeared in July 2016 (Prima Facie PFCD050). I have not heard this disc. Add to this five versions of the magisterial DSCH Passacaglia and several other discs devoted in whole or part to this repertoire, it seems that Ronald Stevenson’s piano music has suddenly become hot property.
read on…. 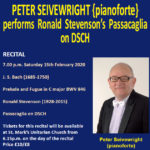 This fourth volume in Christopher Guild’s ongoing survey of the piano ...
Read More

The National Galleries of Scotland and the artist Victoria Crowe are ...
Read More